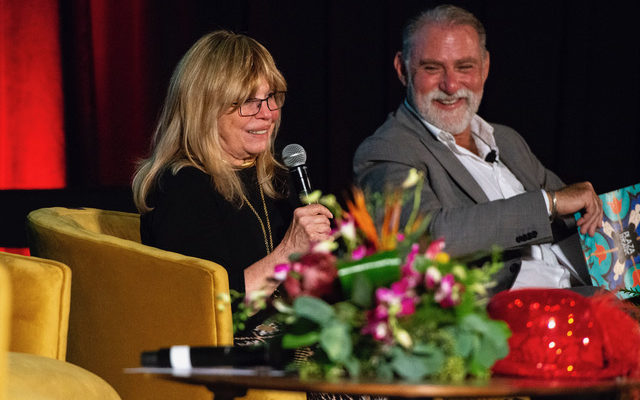 : In a magical blend of Hollywood glam and Palm Springs cool, Nancy Sinatra took the stage at the historic Plaza Theatre for a once-in-a-lifetime performance.

The city of Palm Springs, led by former councilmember J.R. Roberts, has launched a campaign to restore the grand dame Plaza Theatre to its former glory.

Sinatra wanted to be part of the effort and offered to make this rare public appearance. J.R. Roberts said “Nancy Sinatra and the Sinatra family are among the most famous of the many Hollywood celebrities who helped to put Palm Springs on the international stage. Nancy has many fond memories of growing up here and is a huge supporter of preserving our past and our city’s historic architecture. We are incredibly honored that she is involved in the effort to restore this important Palm Springs icon.”

The old theatre – which is sorely in need of restoration – was completely full with 800 ticket holders in attendance for the rare public appearance of Ms. Sinatra, and buzzing with energy.

Sinatra was greeted on stage by a raucous and affectionate standing ovation, which set the tone for the love fest to follow. She was joined by her daughters Amanda Erlinger and A.J. Lambert, actor and singer James Darren, perhaps best known for portraying ‘Moondoggie’ in the Gidget films, author, producer and music historian Chuck Granata, and Wrecking Crew member Don Randi.

Rare family photos were shown and narrated, giving the audience a personal glimpse into the family’s life here in the Coachella Valley. Clips from Sinatra’s 1967 television special, “Movin’ With Nancy,” and from an unreleased TV special from 1973 that has never been seen by the public provided a look back at Sinatra’s spectacular career. During rehearsal Sinatra said that she had fond memories of seeing movies at the Plaza Theatre “from the time she was four years old” and that it was important to her to preserve it. “We’re fighting like hell to keep the culture of the original city alive” she said.

The audience thrilled to Nancy’s soulful rendition of Sonny Bono’s song “Bang, Bang (My Baby Shot Me Down”) and burst into rapturous applause when she ended the show with “These Boots Are Made For Walkin’.

Meat Loaf passes away at age 74

In final video message, Betty White thanks fans “for your love and support over the years”

10 hours ago
Connect With Us Listen To Us On